Importance of Spay/Neuter in Companion Animals 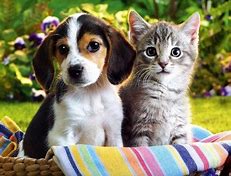 Across America, families regularly bring a new puppy or kitten into their home.  With the addition of this new furry family member comes a lot of questions and decisions to be made.  One such decision is whether or not to have your new pet spayed or neutered. A spay is a procedure performed on a female dog or cat that involves removing the reproductive organs, typically both the uterus and the ovaries.  A neuter is a procedure performed on a male dog or cat and involves removing the male reproductive organs, i.e. the testicles. The timing of the procedure itself will vary by species and breed, but is often recommended after six months of age. Having your pet spayed or neutered is recommended not only for the health benefits, but for the behavioral benefits as well.

mary tumors significantly decreases. A second important health benefit of having your pet spayed is the prevention of a condition called pyometra. A pyometra is an infection inside of the uterus that usually occurs shortly after a heat cycle ends.  It usually does not respond to medications and if left untreated can be fatal.  The treatment for pyometra is to spay your cat or dog, but due to the infection the surgery has increased risks.  Additionally, spaying also eliminates the possibility of uterine or ovarian cancers.  And let’s not forget population control. Once your cat or dog has been spayed, you no longer have to worry about unplanned litters of puppies or kittens that, while adorable, will eventually need to be found new homes.  Millions of unwanted puppies and kittens are brought to shelters each year and many of those end up euthanized due to lack of homes available.

Much like the health benefits of the spay, neutering prevents the development of certain cancerous processes (i.e. testicular tumors), as well as unplanned pregnancies. In addition to the expected health benefits, neutering is also recommended to prevent the development of certain behaviors, such as territorial marking, roaming, mounting, and possibly aggression. However it is important to remember that if the

behavior has been going on for a while, it is more likely that the behavior has become a habit separate from the hormone driven origin.  This is why neutering before those behaviors become ingrained is recommended.  As was mentioned above, the recommended timing of neutering varies by species and breed. For example, large breed dogs can benefit by delaying the timing of the neuter until they have reached skeletal maturity.

In the end, choosing whether to spay or neuter your pet is an important decision each owner will need to make. By understanding the both the health and behavioral benefits,  owners can better make informed decisions moving forward.